Your microwave is an electrical device. And since it has to emit heat rays, it needs quite a bit of energy. You should always let a professional repairman fix a microwave for you.

If you try to fix a microwave yourself, you risk getting a nasty shock, or – and it can happen to anyone (that’s not trained) ruining your microwave for good.

Some things are very little fixes, like a switch on the motherboard. But to get to that motherboard, you have to take the microwave apart.

Don’t mess with all that – call us first. 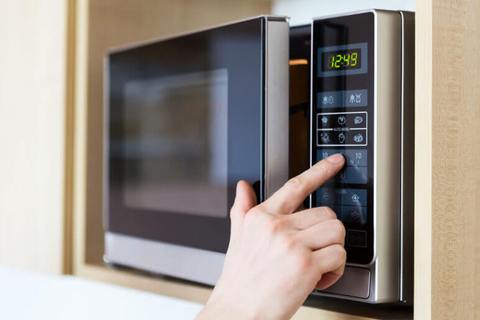 There are a few common issues we see when it comes to misbehaving microwaves. A lot of them have to do with the general operating system, not the heating element or intended function itself.

Have you ever had to figure out someone else’s microwave and you can’t seem to do it? That’s annoying.

But what’s even more annoying is if your own microwave buttons (touchpad) aren’t working. Sometimes there are just a few buttons that stick or don’t work entirely, or it’s the whole touchpad.

In that case, there’s probably an issue with the motherboard, which is like the brain of the operating system. It might have a circuit shorted or need a full replacement.

You can get a new motherboard and not have to replace the whole unit.

And since good microwaves are at least $100, you’ll still be saving more with a professional repair.

Mommy, what’s that scary sound? It shouldn’t be the microwave. Yours should sound the same, though they tend to get a little louder with time.

But if you hear a new sound (and you’ll know it’s new) it’s time to call a repair person. They can tell you if it’s a quick fix, or if it’s time to get a new microwave entirely.

Before you call a professional t fix a microwave, make sure you’re checking the obvious causes. Is the rotating plate uneven and clunking against the bottom of the microwave?

Is one of the rotating arms not in its rotating slot? Those things are 2-second fixes and can make a lot of noise if they’re out of place.

A lot of times this happens when you overload something or don’t center your food in the microwave.

Speaking of centering your food in the microwave, did you know that moving your leftovers so there’s an empty hole in the center of the plate will help them reheat more evenly?

The Door Won’t Shut (or Register as Shut)

While it’s annoying, it’s usually an easy fix. If you slam it too hard and you have a plastic unit, you may have actually cracked or broke the male part of the latch. In that case (and since it was a cheap model) you should get a new unit.

If the latch looks fine and you can’t figure out why that issue is happening, call a repairman. Especially for a more expensive unit. It might be something on the smartboard.

Granted you have a microwave with a turning tray, then it not turning is an issue. If it’s not turning, you want to first check that the plate and the arms are well aligned.

Then, try to turn the arms with your finger to make sure there’s not some sort of blockage. If it won’t turn at all, there might be an issue with the roller guide.

If they’re turning when you push them but not on their own, it’s probably a problem with the drive motor.

Call our company and tell us about the problem, and we’ll help decide if we need to send someone out.

If things are coming out of your microwave cold or it’s taking a lot longer to heat than usual, there’s probably an issue with the high voltage diode.

If it’ not that, then it might be the door switch or the magnetron. No matter what it is, heating elements aren’t something you want to mess with yourself.

Call a professional and please don’t put yourself in danger.

The Life of a Microwave

A high-quality microwave might last 10-15 years. If it’s older than that, it’s time to replace it and get a new one. Remember that the more you spend on a microwave is a good indicator of quality and longevity.

And if your professional repair person says it’s time to replace it, listen to them. Running a machine who’s electric panels or wiring is off is dangerous.

What Appliances Should You Repair?

Generally, you should at least call and talk to a repair company if you spent more than $100 on an appliance.

Plus, repairing is better for the earth than buying new when there’s an issue.

Backed by years of experience and quality service, we are the company you can trust!