All you want to do is get the laundry done. So when your GE washer lid won’t unlock, your mission comes to a screeching halt. Luckily, there may be a simple solution. Some washers have lid locks that are heat activated. So before diving into further steps, wait 15 minutes after the wash cycle has completed to let the machine cool. If the lid still won’t unlock, then you may have a bigger issue. If in doubt, make sure to call a GE appliance repair professional.

Grab your model number and we’ll help you identify the most likely causes to why your GE washing machine lid won’t unlock.

On the early production of these models, there were defective resistors used on the control board that affected the lid lock. Trouble would present itself when the GE washer lid lock bypass would fail. Boards in stock have corrected resistors.

Replace both the lid lock and the control board when the GE washer lid lock reset doens’t work. To unlock the lid, follow the procedure below.

Step 1: Remove the four screws and the back panel.

Step 2: Remove the two screws holding the top cover on. One is by the power cord and the other is behind the capacitor. 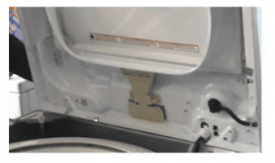 Step 4: Place a small screwdriver in the hole in the lid lock to unlock it.

Step 5. You will need to replace the control board to restore operation.

Backed by years of experience and quality service, we are the company you can trust!